The Muslims reformers in India launched many religious movements. Some tried to revive the religion and other tried to reform the religion. During the 19th century religion reforms movement were on the peak. Movements like Deoband Movement, Ahamadiya movement, Aligarh Movement; Wahabi Movement has influenced the masses and made them think about their religion and their status.

In this article, we will discuss about Wahabi movement and Aligarh Movement.

Saiyad Ahmad was the leader of movement in India who was influenced by the teaching of Abdul Wahab of Arab and saint shah Waliullah. 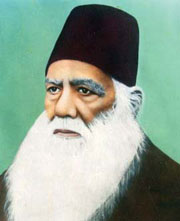 Wahabi movement was a reformist movement, which tried to do away with un-Islamic practices in Islam. It was a Islamic purifying movement. However, later the movement turned against Sikh and British Imperials.

Saiyad Ahmad led a countrywide movement to spread his movement. He wanted to make India from Dar-ul-Hurb to Dar-ul-Islam. Dar-ul-Hurb means land of Kafirs.

Syed Ahmed criticized all changes and innovations in Islam and encouraged a return to the pure Islam and society of Arabia of the Prophet’s times.

For the achievement of the desired objectives, Syed Ahmad looked for

At first, he revolted against the Sikh kingdom ruler Maharaja Ranjit Singh. In 1830 they captrured Peshawar but they lost it to Sikhs in 1831 after the battle of Balakot.

After the inclusion of Punjab in 1849 in East India Company British was the target of Wahabi Movement.

Wahabi revolted against British in 1860s but British understood the upcmong danger. They suppress the movement after attacking Wahabi bases in Sathana, Bihar.

Wahabi Movement spread the word of religion in Islam and it accepted Islam as the most important religion in the world. The British in 1870 altogether suppressed the movement.

Sir Syed Ahmad Khan launched the Aligarh movement. He started the Mohammedan Anglo-Oriental College at Aligarh in 1875, which was later, become center of Aligarh Movement.

Unlike Wahabi movement Aligarh movement was a revivalist movement; which sought change in religion as the need of the hour. Aligarh movement saw western education necessary for the development of individual.

The Aligarh Movement was the drive for modern Muslim education.

It played an important role to Indian Muslims by its political foresightedness.

From the early stages, the movement was political in nature.  In 1886 Sir Syed Ahmad Khan founded the All India Muhammadan Educational Conference i to promote more broadly the educational aims of Aligarh Movement.

New trend in Urdu literature was due to Aligarh Movement. Sir Syed Ahmad Khan and his association accepted and promoted simple style, which helped Muslims to understand the main purpose of the movement. It discarded the old writing style of Urdu, which was not for the common people.

The Aligarh Movement promoted adoption of a historical and moral attitude, which influenced the life of the Indian Muslim.

It helped scholars to leave the romantic style of prose and poetry.

Urdu Defense Association considered as derivative of the Aligarh Movement.

The Deoband School was opposed to the movement as Aligarh Movement. They considered it as supporters of the British

The Wahabi movement and other movements before 1857 saw Muslims anti- British. After the revolt, Sir Syed Ahmad Khan thought to have support of British in the development of Islam and Muslims in India.

Religious reform among the Sikhs was begun at the end of the nineteenth century when the Khalsa College was started at Amritsar. But the reform effort gained momentum after 1920 when the Akaliement rose in the Punjab. The main aim of the Akalis was to purify the management of the gurudwaras or Sikh shrines.

These gurudwaras had been heavily endowed with land and money by devout Sikhs. But they had come to be managed autocratically by corrupt and selfish mahants. The Sikh masses led by the Akalis started in 1921 a powerful satyagraha against the mahants and the government which aided them.

The Akalis soon forced the government to pass a new Gurudwara Act in 1922 which was later amended in 1925. Sometimes with the aid of the Act, but often through direct action, the Sikhs gradually turned out of the gurudwaras the corrupt mahants, even though hundreds of lives had to be sacrificed in the process.

The religious reform movements of modern times had an underlying unity most of them were based on the twin doctrines of reason (rationalism) and humanism, though they also sometimes tended to appeal to faith and ancient authority to bolster their appeal.