Regional disparities along with food security have remained an issue of debate in Maharashtra ever since its inception as a State in 1960. Several studies have examined economic development as well as food security issues at the regional level, but there has been no systematic attempt made to analyse food security comprehensively taking into account its four elements viz. availability, accessibility, sustainability and utilisation. The circular argument that disparities in investment lead to underdevelopment and consequently food insecurity is a part of our larger argument. Therefore, an attempt is made in this paper to understand food security across regions of Maharashtra. The results reveal three major groups of regions in terms of food insecurity. While certain regions experience food deficit and lower poverty along with a higher level of nutritional status, the other regions exhibit higher levels of under-nutrition and poverty along with relatively higher and medium food sufficiency. 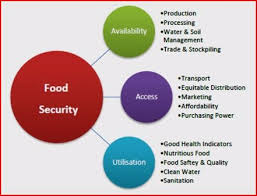 Currently, there are various schemes being implemented by the state government which include Take Home Ration (THR) programme, public distribution system (PDS), status of Supplementary Nutrition scheme (SN) and ready-to-use therapeutic food products to severely malnourished children.Despite several schemes been implemented, the issue regarding malnourishment has not been solved. Recently the state has organised 82 medical camps with the help of private and public hospitals during which 6,481 children were checked. Of these, 2,945 children were diagnosed with moderate malnutrition and 1,493 were severely malnourished.

Public distribution System and other schemes related to food securtiy:-

The affluent families do not purchase foodgrains under PDS and therefore with a view to curb diversion of foodgrains and provide more foodgrains to the needy families, the State Govt. introduced Tricolor ration card scheme w. e. f. 1st May, 1999. Accordingly, as per following criterias 3 different colored ration cards are issued in the State :-

Under Targeted Public Distribution System the following criteria are applied :-

In the state Antyodaya Anna Yojana has been started w.e.f. 1st May 2001 Under this scheme 35 Kgsfoodgrains( Wheat at the rate- Rs. 2.00 per Kg+ Rice at rate Rs. 3.00 per Kg ) is distributed to the AAY cardholders.
Under this scheme the families are selected from following BPL categories..

The families having annual income of Rs. 1 Lakh or above, any member of the family possessing a four wheeler or the family aggregately holding more than 4 hectare irrigated land are issued white ration cards.

“Annapurna scheme” is being implemented in this State w.e.f. 1st April, 2001. This is 100% centrally sponsored scheme. Under this scheme 10 Kgs of foodgrains per month are provided free of cost to the old destitute people of 65 years and above age. The main eligibility criteria for the benefit of this scheme is that the person should not be in receipt of pension under the National old age pension scheme or state pension scheme.

Central Government sanctions additional allocation of foodgrains (Wheat & Rice) at BPL rate for distributing it to Welfare Institutes in the State. Accordingly food grains are distributed as per GR dated 26.4.2002.Under the said scheme 15 Kgs. foodgrains per month per cardholder are distributed only to Establishment Ration Cardholders within limit of the received allocation.

The scheme of distribution of subsidised imported Palm Oil is being implemented in the State. The GOI has sanctioned total allocation of 87,740 MT Palm oil for the State for the period from April, 2011 to September, 2011. This palm oil is being distributed to the beneficiaries in the State for the period from July, 2011 to December, 2011. Under this scheme 1 litre Palm Oil per beneficiary (i.e. per card) per month is being distributed at the subsidised rate of Rs. 45/- per litre to BPL, AAY, APL& Annapurna Beneficiaries in the State.

As per the directions of the State Govt. rates of wholesale & retail kerosene, are finalised by Collector at District level & Controller of Rationing in Mumbai & Thane Rationing Area. At present the retail price of kerosene in Mumbai / Thane Rationing Area is Rs.15.05 per litre and in other districts it comes between Rs.15.05 to Rs.16.22 per litre.

As per the policy of Central Government since 16th June 1988 a special subsidised rate is made applicable to the kerosene sold in hilly areas of the State. This scheme has been started in the 11 districts and 62 talukas. The 11 districts are Dhule, Nashik, Thane, Pune, Satara, Ratnagiri, Sindhudurg, Sangli, Kolhapur, Ahmednagar&Raigad.

Measures have been taken to avoid misuse of kerosene

The scheme of Door Step Delivery is being implemented in the tribal, remote and DPAP areas wherein the transportation of the commodities is carried out from government godowns up to door step of fair price shops by the government vehicles and at the government cost.

In tribal areas, this scheme is being implemented through the Maharashtra State Co-operative Tribal Development Corporation Limited, while in DPAP areas it is implemented through Maharashtra State Co-operative Marketing Federation Limited. The Corporation and the Federation are reimbursed for running cost of the scheme @ Rs.15.00 and Rs.13.00 per Quintal, respectively

The Minimum Support Price (MSP) Scheme is a scheme of the Government of India (GOI) to safeguard the interests of the farmers. Under this Scheme the GOI declares the minimum support Prices of various agricultural produces and assures the farmers that their agricultural produce (of FAQ) will be purchased at the MSP, thereby preventing its distress sale. The Food Corporation of India (FCI) acts as the Nodal Agency of the GOI. On behalf of FCI, in Maharashtra, the MSP Scheme is implemented through the State agencies.

Recently The Maharashtra government launched Aadhaar-linked ration at fair price shops across the state by March 31. Aadhaar card holders will have to record their thumbprints at biometric machines set up in ration shops to access subsidized grain available under the Food Security Act.

Maharashtra Government is one of the front runners in this initiative and intends to repair the flaw by introducing technology solution in this food supply and distribution system. An Expression of Interest (EOI) was published by the state government which attracted interest of five bidders that included TCS, CMC, CMS and ECIL along with Spanco. In 2009, TCS and Spanco were short listed as the final contenders on technology grounds and the project was bagged by Spanco (PPP model) on BOOT basis for 3 years.  The total size of the project was about INR 250 crores. The scope of the contract is to computerize the entire ration distribution system and introduce new technology in order to stop pilferage in the system, so that the subsidized item reaches the needy.